The 20th Leith Harbour Free was held in calm sublime weather conditions today.  The event was on Course Two along the Portobello Cycle and Walk Way.  With the weather playing its part and a nice early 8am start the scene was set for some personal bests. 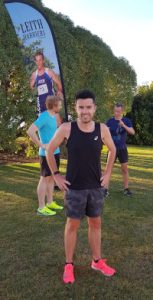 Leith’s Tadhg Ryan-Charleton won the 10km in a personal best bang on 34 minutes.

He was immensely pleased with his effort and we are going to hear more from this talented runner soon!

Caversham’s Ben Pigou was next to hit a personal best – finishing second in 35 minutes 48 seconds. Going by the happy smiles in the photos, these guys were definitely happy chappies.

Leith’s Susan Craig also had one of her best runs for quite some time running the 10km in 57 minutes 50 seconds. She was well pleased with her run.

Thanks to all those who took part and to the volunteer marshals and the timekeepers.  See you all at the next LHF which will take place on course one on Thursday 29 April 2021 starting 6pm sharp.

Susan Craig says she will definitely be taking part in the future
(Sunday, 28 July 2019)

Today was a perfect day for a run on the cycleway – no wind to speak of and mild temperatures. It was great to head out with a good sized crowd – around 50 people walking and running the 5km and 10km course. The event was very well organised with pace runners for the faster paticipants and times for all finishers – all for free! I hadn’t run any distance since the ChCh half marathon at Queen’s Birthday weekend in early June due to illness and overseas travel but I got lots of encouragement from other runners and made it to the end of the 10km in a not too terrible time. I will definitely be taking part in future runs organised by my club, Leith – thanks team!

Leith Harriers held its second Leith Harbour Free 5/10km run on Sunday at 10am. A field of around 50 athletes turned up on what was a perfect day for a run on the cycleway from the corner of Neptune and Magnet Streets to St Leonards and back. There was no wind to speak of and mild temperatures. There were pace runners for the faster participants and times for all finishers. The majority opted for the 10km with Under 20 runners Nathane Cochrane (first in Nathan Cochrane in 37:17.6) and James Matthews from Hill City Uni (second in 37:20.8) being the first 10km runners to finish. Third was Senior Men’s runner Jack Brooks in 38:32.6 and fourth was Leith Master Men’s 35-49 Simon Leaning in 38:34.8. The first runner to finish the 5km was Leith Senior Woman Claudia Sole in 24:23.7. A big thank you to all who took part, organised and assisted.

An interesting take on Gaya’s experience of the event, dressed like Michelin Man and worried about encountering a sea lion
(Thursday, 20 June 2019)

I wasn’t sure what to expect with the Leith Harbour 10km, the last time I ran along the harbour walkway at night I ran into a sea lion. Safety in numbers I thought to myself. And numbers there were! I was surprised at the turn out for the inaugural Leith Harbour run given the cool evening temperature. It was brilliant to see. Too cold to remove my hoodie at the start I decided to run layered up and was soon comfortably trotting down the flat harbour path. I may have regretted the decision to dress like the Michelin man by the time I reached the St Leonards turnaround but aside from that, it was a very pleasant run. Many thanks to the Leith crew who organised the event and made sure that everything ran smoothly on the night. I look forward to the next Leith Harbour Free 5 and 10km run.

Neale enjoyed the challenge and here is his account of the event
(Thursday, 20 June 2019)

On arriving at the start line on a cool winters night there was plenty of anticipation in the air for the inaugural Leith Harbour Free 5 and 10km run. A dedicated bunch of runners and walkers eagerly awaited the start before making their way down the Harbourside walkway into the night. Like most runners I enjoy a challenge and trying a new run/race is exciting and sharing the experience with like minded people keeps me coming back for more. The more or less flat there and back course is very achievable and the Harbourside offers stunning views, well maybe not so much in the dark but as the light returns it will. Finally whatever your fitness level this event will offer a challenge and reward you by improving your fitness and helping you towards your goals.